A lot of investors doesn't buy IPO and WB specifically asked us to stay away from them. So driven by curiosity, I have decided to look back how did past IPOs perform and see how what I could learn from it. This will be the start of a series, where more will come whenever I have the time and energy to do. Stocks are ranked chronologically according to their IPO date. 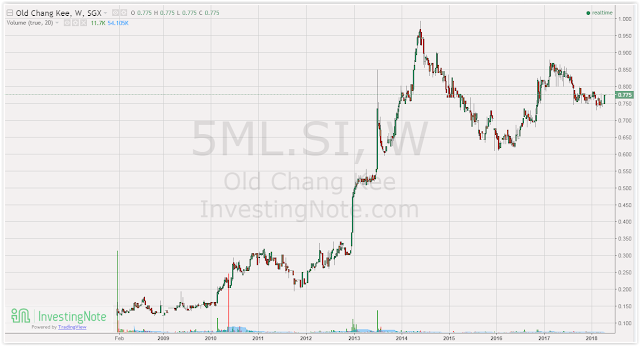 2. Afor Limited (now $Epicentre(5MQ.SI)) {Retailer - Apple products} : Jan 2008
Business was on the rise and net profit peaked at FY2011 (4.8mil), followed by negative profit for consecutive 4 years from FY2013 to FY2016. It was surprising to see that their business actually started withered so early. 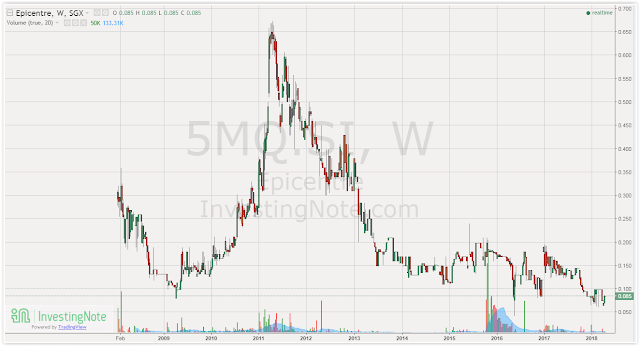 3. $Wee Hur(E3B.SI) {Construction}: Jan 2008
Cyclical industry, best years were during FY2012 to FY2015. Though they have diversified into dormitory business and hold some investment properties but that's not going to bring them back to glorious days 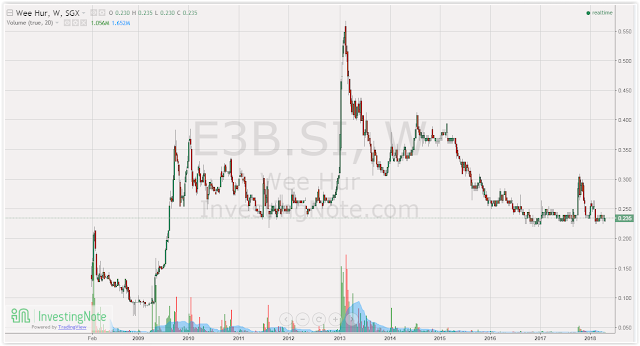 4. Centraland limited {Property}: Jan 2008
IPO price at $0.50 and delisted at $0.40 in October 2011
5. $Yongmao(BKX.SI) {Manufacturing - Tower Crane}: Feb 2008
Not a great business since the demand of this type of equipment is fairly inelastic and highly cyclical. Even though its net profit was increasing during FY2013 to FY2015, the share price is mostly one way down. 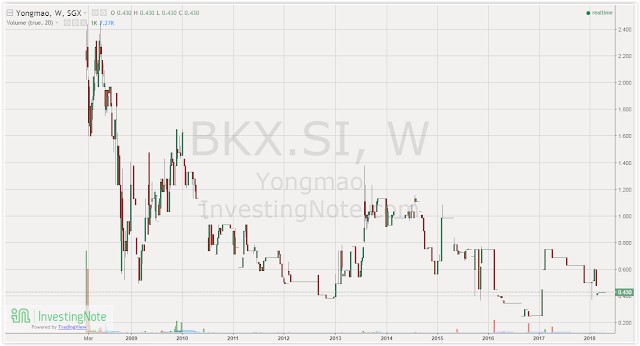 6. $Samko Timber^(E6R.SI) {Wood products}: Feb 2008
With net profit either big loss or barely profitable, and without single cent dividend for all these 10 years, is this IPO a pure con business opportunity? 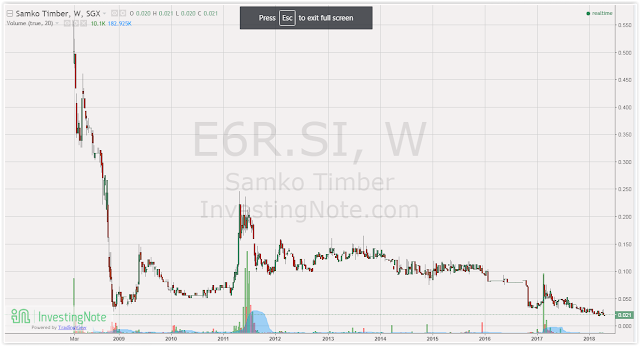 7. $Roxy-Pacific(E8Z.SI) {Property}: Feb 2008
Had fantanstic results (increasing revenue and profit) since IPO to FY2015 due to boom in property market. Same like most property counters, they have diversified into investment properties for more recurrent incomes. 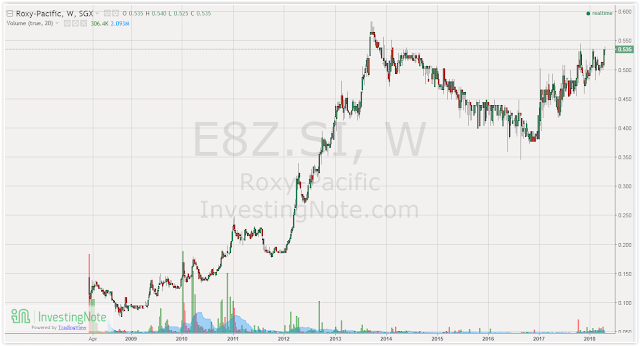 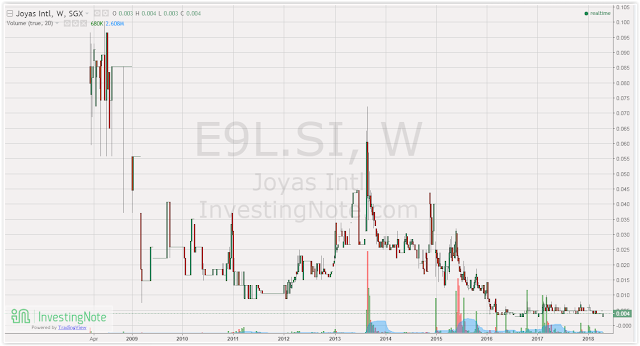 10. China Eratat {Sportswear}: Apr 2008
One big con job. Fantastic business case to study.
https://www.fool.sg/2014/08/19/how-investors-can-protect-themselves-against-fraudulent-s-chips-such-as-eratat-lifestyle-limited/
11. China Zaino (now $Dapai Intl^(FP1.SI)) {Backpack}: Apr 2008
Is this so called 'the No.1 backpack company in China' self-proclaimed? Cash burning and loss making for so many years, suspected and delisted in Aug 2017. 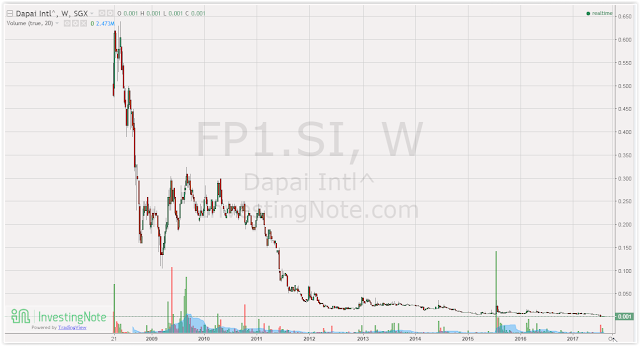 12. Hisaka Holdings {Automation solution}: May 2008
IPO $0.23, and RTO by Regal International Holdings. Couldn't trace what's the RTO price but anyway this IPO did seem to be a cash out plot from the start
13. $China Taisan(AZW.SI) {Knitted fabrics}: June 2008
Their businesses seem to be ok during the first few years of IPO, of which they gave out dividends in FY2008 and FY2009. They were even mentioned on NextInsight's in 2011, but stiff competition since 2012 has been a consistent headwind for the company. Afterall, its not a technology product even though you have a technology in the company's name 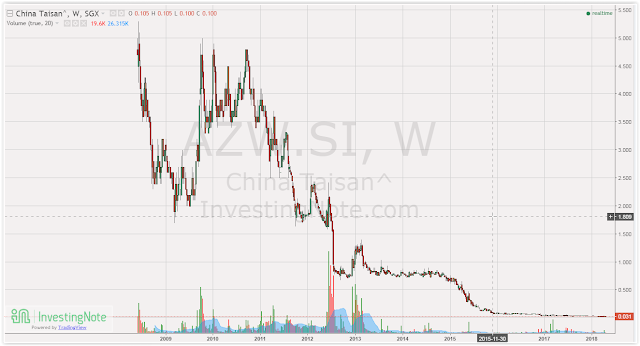 14. Indiabulls Properties Investment Trust {Trust} : June 2008
IPO price: $1.00. With so many cases of S-chip frauds, time for an exotic flavour. NI has a wonderful article that sums up the whole horror show.
https://www.nextinsight.net/story-archive-mainmenu-60/938-2016/10725-indiabulls-property-investment
15. Sino Construction Limited (now $MMP Resources^(F3V.SI)) {Construction}: June 2008
Another company which struggled to get projects in competitive industry and forced to sell assets, issue rights, and took on diworsification 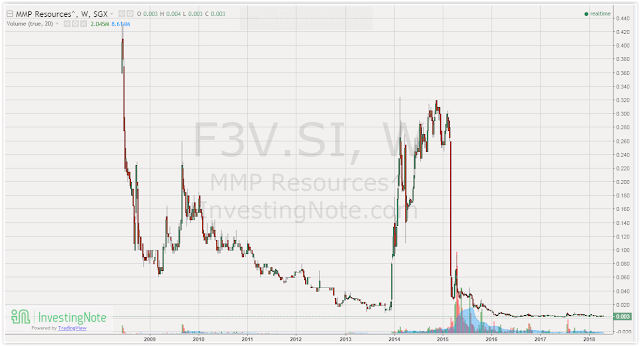 16. $Combine Will(N0Z.SI) {Manufacturing - Toys, Toolings} : June 2008
Business was good that they were even considering to do a dual listing in Korean Exchange in year 2011. But just one year later the massive struggle started due to margin erosion from rising labour wages in China, rising material costs and industry competitiveness. The speed of losing competitiveness and profitability was simply astonishing. Will they combine their wills and make a comeback? 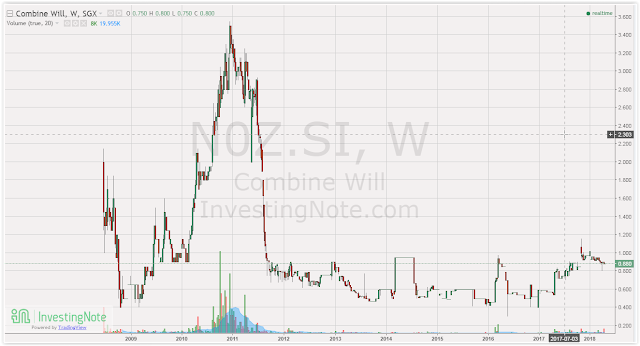 17. $Mencast(5NF.SI) {O&G service}: June 2008
A company that grew from manufacturing sterngear to a comprehensive MRO solutions provider in the offshore and O&G field, the hard-pressed sector for past few years. Will they able to survive and emerge stronger? 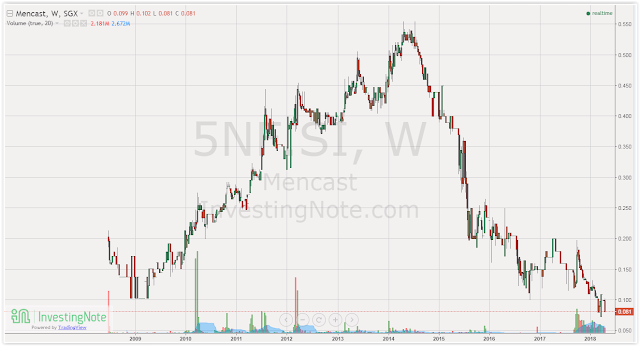 18. $China Fibretech(AXL.SI) {Fabric processing service}: June 2008
A company that struggled in its business since listing. Another company in a crowded and highly competitive industry. Suspended in Nov 2015 until now. Will it be forever suspended?

19. $Healthway Med(5NG.SI) {Healthcare}: June 2008
How much more you can grow if you are already the largest locally? Not much unless you venture abroad or venture out to other businesses. Unfortunately they have struggled badly for both options and coupled with poor money management (questionable loans), they seems to be deeply wired in problems. 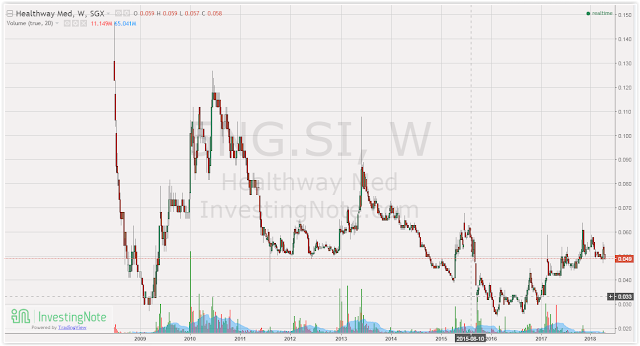 20. Heng Long International Ltd {Leather products}: Jul 2008
IPO price: $0.34. Just barely 3 years after IPO, as one of five top-tier tanneries of crocodile leather in the world, they had been acquired by LVMH Asia Pacific for $0.60 per share and delisted.
21. $Kencana Agri(BNE.SI) {Palm oil}: Jul 2008
The whole palm oil industry has been on tough cycle since year 2011 but this palm oil counter particularly has not been well managed. Instead of building up its plantation, they are building an overwhelming debt over the last few years. 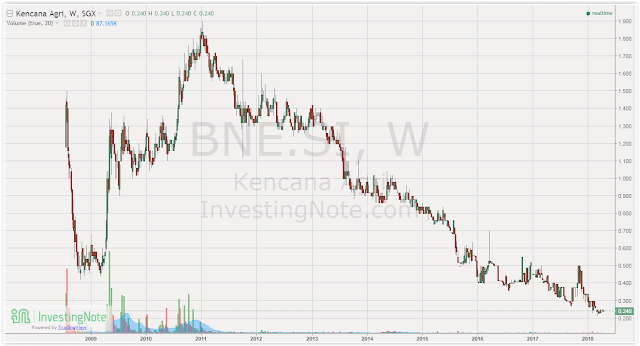 22. Zhongguo Pengjie Fabrics {Fabric}: Aug 2008
IPO price: $0.23. Not much info could be found for yet another China fabric counter, but this one at least doesn't end in tragedy with volutanry delisting in 2010 for $0.23 per share.
23. $Artivision Tech(5NK.SI) {Video management}: Aug 2008
I have not check each year carefully but the company seems to be making losses every single year . Seriously do not understand why are they still running the business and what's the prospects. 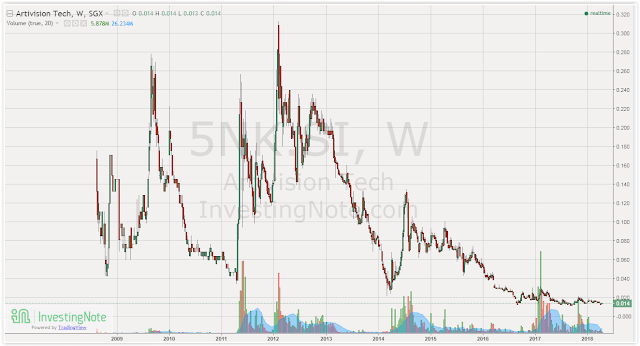 24. $Tritech(5G9.SI) {Construction}: Aug 2008
Another company in a cyclical business, but the local business of the company has been doing fairly ok, it is the company's new businesses in China that are dragging the company into the red.  Those businesses are burning lots of cash and there is no clear indication of when they would turn profitable. 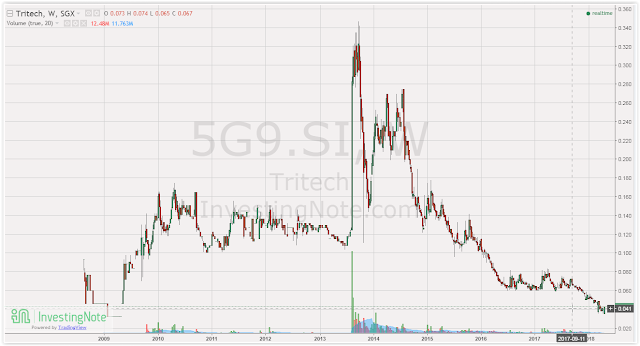 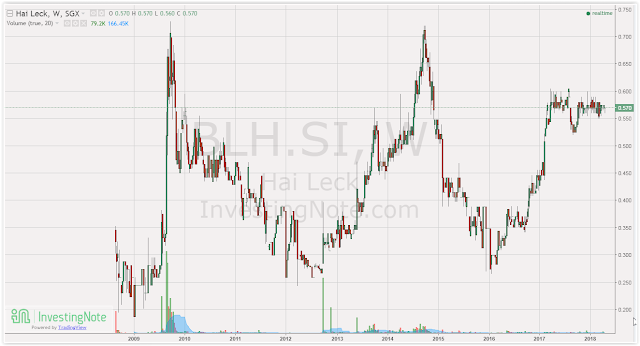 26. Qian Feng Fabric Tech Limited (now $Asia Fashion(BQI.SI)) {Knitted Fabrics}: Aug 2008
Just like other fabrics company that were also launched this year, the company's business has been struggling since IPO. 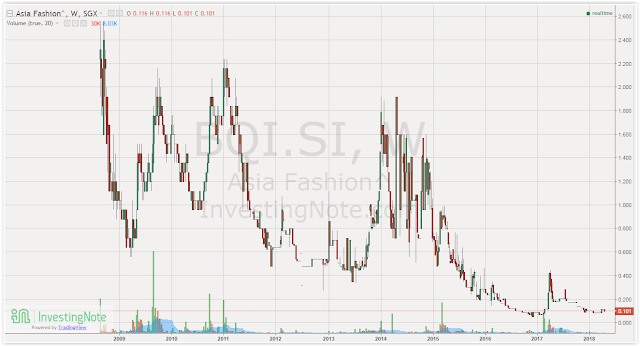 27. Qualitas Medical Group Limited {Healthcare}: Aug 2008
IPO price: $0.25. A private healthcare services provider in Malaysia, delisted in 2011 for $0.35 per share. Has been in the news for returning to be listed here in year 2015, and but only now they will be IPO soon.
http://www.probutterfly.com/blog/analysis-of-qualitas-medical-ltd-upcoming-ipo
28. Trump Dragon Distillers Holdings Limited (now $Dukang(BKV.SI)) {Beverages}: Aug 2008
The business was good until year 2013 where China started to clamp down corruption and implemented austerity measures. Given that this brand doesn't belong to the top category, its popularity faded fast. The top beverage brand like moutai has its share price skyrocketed in recent years due to the strong demand of China's domestic consumption. Maybe they should change back the name to Trump Dragon and send Trump a bottle of TrumpDragon. 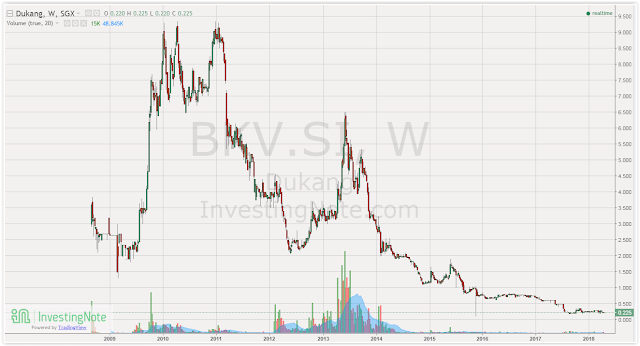 29. $ChinaKundaTech(GU5.SI) {Manufacturing - Moulding}: Oct 2008:
IT seems that their business peaked one year after IPO. Their company website last update was in 2009 where their customers deferred delivery of the orders in that year. In 2010 they formed a JV to tap on hot China's auto market in 2010, but nothing seem to have happened except dwindling of share price. 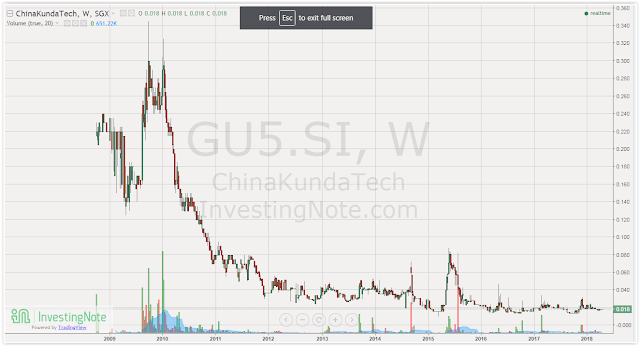 30. Otto Marine {Offshore marine}: Nov 2008:
Offshore marine services had been hit hard during the O&G slump but their businesses have started to decline much earlier from year 2011. It had been delisted at 0.32 per share in 2016, becoming the first company from the sector to be delisted.
So there were 30 IPOs in 2008, where 13 are local stocks, 1 malaysia (Qualitas), 1 india bull, 2 indonesia, and the rest S-chips. Looking back from now, the star of the year is OldChangKee, followed by RoxyPacific. HengLong, Qualitas both delisted 3 years later for decent gain. Hai Leck, Mencast, Combine Will all had good times, but struggling at the moment. Wee Hur is a not great steal, but it has done OK. Zhongguo Pengjie Fabrics is the only escape from the bunch of China fabric stocks. Centraland delisted with fair bit of loss. The rest of the 20 stocks would have send you to KR by 50% to 100% loss (or more than 100% if you have participated in additional rights, warrants, etc activities that take more money out from you pocket). IPOs, are simply full of traps.
Thank you for your patience to read until end of the post. If you have specific insights or opinions about these stocks especially on their businesses that you would like to share, please do comment :)
Please point out any errors too as the accuracy of all information is only as good as the source (which is in big part: Google, price info from IN, dividends info from dividends.sg, and some info from company's AR)
Special thanks to mr ipo, if not for his timeless site, I wouldn't know IPOs of that year.